Landstar Agent Mike Thompson and Business Capacity Owners Brian and Lisa Clevenger made headlines when a certain F-117 Nighthawk was photographed during transport for Lockheed Martin Skunk Works® in 2019.
The Nighthawk’s move to the Ronald Reagan Presidential Library was even featured as a cover story in The Road to Success® magazine.

So, when the opportunity came to plan the logistics for another Lockheed fighter jet, Thompson, the agency owner of D&M Transportation Inc., felt like he shouldn’t brag about the move. However, his customer Air Zoo thought the arrival of its new F-117 nicknamed Shaba really was something to boast about.

Affectionately called the Kalamazoo Air Zoo by air enthusiasts, the Smithsonian-affiliated aerospace and science museum in Michigan had been waiting more than a year to announce the transport of the aircraft.

“I really can’t believe the time has finally come, to sign for and start this exciting journey back to Southwest Michigan with the first operational Lockheed F-117 Nighthawk released for public display east of the Rockies,” Air Zoo President and CEO Troy Thrash announced via press release November 30, 2020. Additionally, Thrash explained he would join the three Landstar BCOs Brian and Lisa Clevenger, and Zach Lindler to document the plane’s transport from Tonopah, Nevada.

By Dec. 2, Air Zoo’s social media channels were buzzing with excitement as Shaba began its 2,000 mile-long haul. The museum shared daily social media updates about the BCO trucks hauling the F-117 fuselage and wings through photos, videos, and live commentary.

With the plane’s wings secured to his trailer, Landstar BCO Zach Lindler was the first truck to arrive at Air Zoo. “We are so excited to welcome the first truck carrying the wings of the F-117 Nighthawk Shaba to Kalamazoo!”

Air Zoo continued to document the project’s progress via social media from the unloading of the wings to the arrival of the 100-foot long, 20-foot wide fuselage. 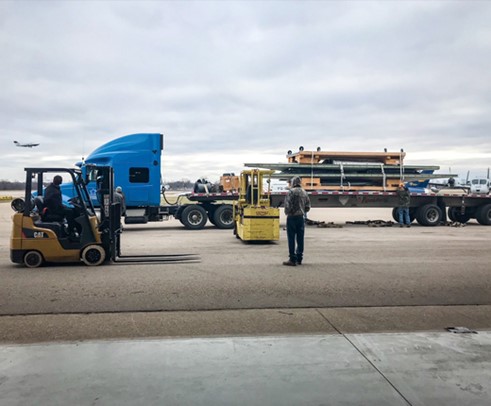 Nine days after leaving Nevada, the Clevengers made the final turn toward the Kalamazoo Air Zoo. In parade-like fashion, the truck was greeted by eager onlookers, waiting to catch a glimpse of the well-traveled stealth fighter jet.

“Because of the professionalism and experience of Landstar BCOs, customers like Air Zoo have enough confidence in our services that they invited the community to watch as the Nighthawk arrived,” said Landstar Agent Mike Thompson. “I know I said that I didn’t want to brag too much, but yes, transporting Shaba was something to brag about.”

The restoration of Shaba, the decommissioned Nighthawk F-117 (tail No. 817), is expected to take a year. The public is invited to view is the restoration while at the Air Zoo Discovery Center. To learn more about Shaba’s journey and watch the video footage of the Landstar BCOs’ trek to Michigan visit www.AirZoo.org.

Watch Shaba’s journey to the Air Zoo, and the ongoing restoration of the F-117 Nighthawk:

Landstar independent BCOs saved millions of dollars with LCAPP in 2020!

Landstar BCOs pumped more than 135 million gallons of fuel last year, setting a new record of more than
$62 million in fuel savings* through LCAPP. The previous LCAPP fuel savings record was $47,312,132, set in 2019.

That’s not all. LCAPP helped BCOs purchase 37,270 new tires in 2020. Every Landstar BCO saves $50 to $100 or more off typical retail pricing of tires when they purchase through LCAPP.

*Landstar’s total fuel rebate information is calculated weekly and compiled based on information provided to Landstar from its LCAPP vendors. The annual total savings amounts for fuel was calculated from data compiled throughout 2020. “I am very humbled by this award from the SC&RA,” said Markle. “This honor feels much bigger than me because at the end of the day, I just do my job. I make sure I am safe on the road to get home to my family.”

Each year, the SC&RA selects one professional driver from a SC&RA member company to receive the Million Miler Safety award. The SC&RA award recognizes drivers who have accumulated a minimum of one million consecutive miles of safe driving within the industry.

Markle, who leased to Landstar in 2005, became a Landstar Million Mile Safe Driver in 2013 and was selected as a Landstar Roadstar® honoree in 2014. He was nominated for the SC&RA award this year by Landstar’s safety department.

To be considered by Landstar for nomination, the potential recipient must be an independent business capacity owner (BCO) who hauls heavy/oversized loads and has already achieved one million safe miles of driving while leased to Landstar.

In addition to the Million Miler Safety Award, Landstar Transportation Logistics Inc. was recognized with the SC&RA 2020 Transportation Fleet Mileage award in the Over 100 Million Miles category. Landstar received the fleet safety recognition for having the lowest accident frequency rate in that category.

The Specialized Carriers & Rigging Association (SC&RA) is an international trade association of more than 1,400 members from 46 nations. Each year firms across the United States and around the world submit entries to the SC&RA Award competition, which recognizes worldwide excellence in the crane, rigging and specialized transportation industry. More information is available via SCRANet.org.

The Landstar Roadstar® status is one of the highest levels of recognition a business capacity owner (BCO) can receive at Landstar. BCO is Landstar’s term for the independent truck owner-operators who provide the company with transportation capacity under exclusive lease agreements.

Login to LandstarOnline and download your copy for the most recent LCAPP promotions and rebates exclusively available for Landstar business capacity owners (BCOs).

are an added bonus to the 25 cent discount Landstar BCOs already receive on fuel purchases at Pilot Flying J.

BCOs who are not currently members of Pilot Flying J’s myRewards program can join by requesting a card from a cashier at any Pilot Flying J location. The cashier can register the card on site or you can register by visiting www.pilotflyingj.com, then clicking on the gray box titled “Drivers – Earn myRewards Points.”

Truck drivers instantly redeem points for food, merchandise and other amenities at Pilot Flying J travel centers and restaurants. Among the benefits of the myRewards program is the “Shower Power” program. By fueling over 500 gallons in one month, drivers are rewarded with a free shower each day for the rest of that month and one additional month.

We appreciate truck drivers 52 weeks a year, but during this year’s National Truck Driver Appreciation Week from September 11-17, 2016, we’re showing some extra love to the professional drivers who help move America.

Landstar Business Capacity Owners (BCOs) – our term for independent owner-operators – play a huge role in transporting goods safely and on time. So, we ask that everyone join us in saying “thank you” to the men and women professional truck drivers who are on the roads each day.

Attend our online celebration all week by following Landstar on Facebook and Twitter. We’ll have fun posts to share, prizes to win and photo tributes. Use the hashtag #ThankYouBCOs to participate in this online high-five with the Landstar family.

Also throughout the week, Landstar BCOs are invited to visit any of Landstar’s Orientation Centers for lunch. The free meal will be served at Noon, Monday, September 12 through Friday, September 16 at our Orientation Centers in: Fort Worth, Texas, Jefferson, Georgia, Indianapolis, Indiana, St. Augustine, Florida, Lewistown, Pennsylvania, Reno, Nevada, Rockford, Illinois and Burlington, Ontario.

To top off National Truck Driver Appreciation Week, BCOs are invited to join us at our service center in Rockford, Illinois for Landstar BCO Appreciation Days on Tuesday, September 13 and Wednesday, September 14. The event offers BCOs the chance to connect with Landstar executives, attend education and safety meetings, and network with fellow professional drivers. Also, one lucky BCO will drive off in a 2017 T680 Kenworth – the grand prize in the Landstar Truck Giveaway, powered by Comdata.

From everyone in the Landstar family … Thank You BCOs!

Copyright © 2022 All rights reserved.
Web Design and Domain names by